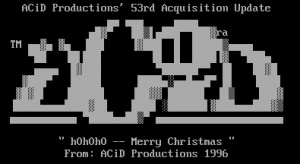 ANSI art is a computer art form that was widely used at one time on BBSes. It is similar to ASCII art, but constructed from a larger set of 256 letters, numbers, and symbols — all codes found in IBM code page 437, often referred to as extended ASCII and used in MS-DOS and Unix[1] environments. ANSI art also contains special ANSI escape sequences that color text with the 16 foreground and 8 background colours offered by ANSI.SYS, an MS-DOS device driver loosely based upon the ANSI X3.64 standard for text terminals. Some ANSI artists take advantage of the cursor control sequences within ANSI X3.64 in order to create animations, commonly referred to as ANSImations. ANSI art and text files which incorporate ANSI codes carry the de facto .ANSfile extension. 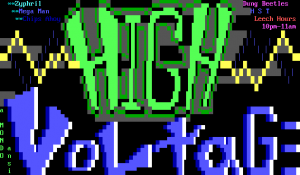 An ANSI art screen for the "High Voltage" BBS

ANSI art is considerably more flexible than ASCII art, because the particular character set it uses contains symbols intended for drawing, such as a wide variety of box-drawing characters and block characters that dither the foreground and background color. It also adds accented characters and math symbols that often find creative use among ANSI artists.

The popularity of ANSI art encouraged the creation of a powerful shareware package called TheDraw coded by Ian E. Davis in 1986. Not only did it considerably simplify the process of making an ANSI art screen from scratch, but it also included a variety of "fonts", large letters constructed from box and block characters, and transition animations such as dissolve and clock. No new versions of TheDraw emerged after version 4.63 in 1993, but in later years a number of other ANSI editors appeared, some of which are still maintained today.

The decline of both BBSes and DOS users has made it difficult for many users to even view ANSI animations. As a consequence, this form of art is no longer practiced to the degree it once was.

Many BBS door games employed ANSI graphics and interfaces. Trade Wars 2002, a multiplayer BBS game that remains popular 20 years after its release in 1986, used ANSI graphics to depict ships, planets, and important locations, and included cutscenes and even a cinema with ANSI animations. Many of these ANSI graphics were created by Drew Markham, who went on to form Xatrix/Gray Matter Interactive and develop Redneck Rampage and Return to Castle Wolfenstein, among other titles.

In 1987 Amiga program Skyline BBS was the first BBS management program featuring an extension to ANSI Art as a true form of script markup language communication protocol. It was called Skypix and was capable to give the user a complete graphical interface, featuring rich graphic content, changeable fonts, mouse-controlled actions, animations and sound.[2]