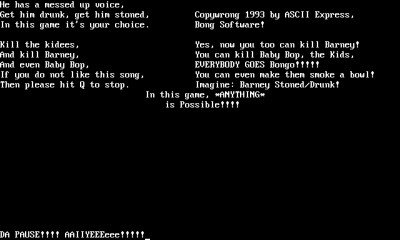 The startup screen from Barneysplat

Barneysplat is a humorous, satirical strategy door game for bulletin board systems in which the player tries to sabotage production of the Barney & Friends children's television program. Barneysplat was created for PC BBSes by Austin Seraphin in 1993.[1]

Barney & Friends premiered in 1992 and was quickly criticized by older children and young adults for being "saccharine" and "one-dimensional."[2] Barneysplat, with its goal of killing or harming Barney the purple dinosaur, Baby Bop and four children, is an example of anti-Barney humor that arose in reaction to the program. [3]

As one reviewer put it, the player's character in Barneysplat is "a sociopathic Beavis and Butthead-style radical stoner anarchist (of the ~1992 variety), hepped up on H/P/A t-files and prepared to vent his disgust at all the problems of the world on one moronic purple dinosaur ..." [4]

As the game progresses, the player chooses from a list of various ways to sabotage activities associated with the filming of Barney & Friends. Examples including spiking the tea at Barney's tea party, ramming someone's bike during a bike race, or offering beer to the children. References to drugs, alcohol, and violence abound.

The game is essentially single-player. Players cannot interact with each other inside the game. The game offers limited competition in the form of a high score list. [5]