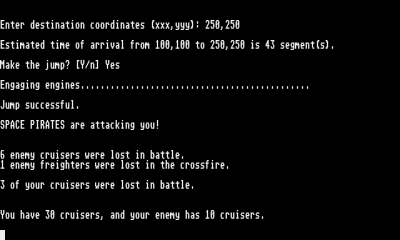 Final Frontier is a turn-based multi-player strategy door game for Atari ST bulletin board systems. In Final Frontier, the player is a trader trying to gain control of a region of the galaxy called the "Outer Rim." This is accomplished by exploring, colonizing planets, trading resources, and using the money earned to upgrade the player's fleets and defenses.

Players can fight each in other in combat; they can also make alliances and work together as a team. In addition to human opponents, there is an AI opponent known as the Satharian Armada.

Like many other BBS door games, Final Frontier is asynchronous[1]; players do not need to play all together at the same time. Gameplay is turn-based, with a set number of turns (or moves) available to play each day.

Radoff said he named the game "Final Frontier" from the opening words of the TV show "Star Trek: The Next Generation," which aired at the time. Final Frontier was inspired by the BBS door game Trade Wars, but Radoff said he designed his game to focus more on exploration. He was also keen to bring it to Atari ST BBS platforms, which at the time had no similar games.[6] 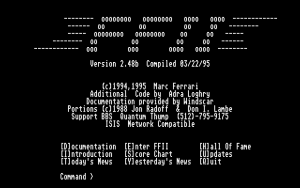 Sysops were allowed to try the software for free, but were expected to register the game for $25. Much of the money Radoff earned from Space Empire Elite and Final Frontier later became seed capital which he used to start the company NovaLink.[6]