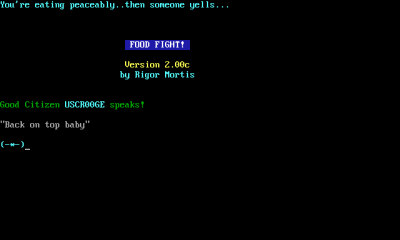 Title screen from the WWIV version of Food Fight

Food Fight is the name of a series of multi-player door games for bulletin board systems.

Food Fight takes the traditional trappings of an RPG and sets them in an elementary school cafeteria. Celebrated as "silly fun"[1], Food Fight allows players to throw food at one another, rather than fight to the death.

Michael Wilson of Compufax Software wrote and maintained a popular flavor of "Food Fight" during the years 1992-95. In his documentation, Wilson credited David Clifford with the idea for the game, saying he had been inspired by the "PIE SPLAT" door. Wilson's version of Food Fight was compatible with a wide range of BBS software. In 1993, he created a Food Fight Editor to allow sysops to edit or customize any part of the game.

Lua error in package.lua at line 80: module 'Module:Arguments' not found.