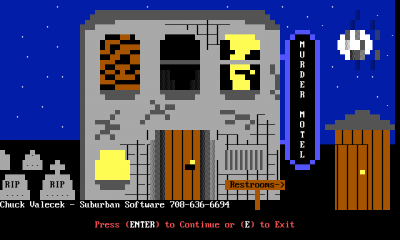 Murder Motel is a death-match-style door game for bulletin board systems in which the player checks into a hotel and tries to find and kill other players, while eluding death himself.[1]

Before a player can enter the motel, he must choose a target opponent to murder. The motel itself is essentially a maze of rooms and hallways and one-way passages. The player must go through the rooms looking for parts to build a weapon; defenses that can be used against particular weapons; and the target. The player also needs to seek a room to hide once his turns are exhausted.[2]

Unlike the similar game "Murder Mansion," Murder Motel is not a "Clue"-style mystery game where the players try to discover who the murderer is.

Murder Motel is turn-based, which means players have a fixed number of turns they can play each day. This number is set by the sysop.

Murder Motel was created by Sheldon Pasciak of Dog-Star Software and first released on July 11, 1989. Pasciak developed Murder Motel as a PC clone of the "Murder Motel" door game for Commodore BBSes by Sean D. Wagle. Pasciak's version expanded in new directions, including a feature which enabled sysops to create custom motel maps.[2]

In 1993, the source code was passed to Chuck Valecek, who took over maintenance of the game. Valecek described Murder Motel as having elements from the movies "Psycho" and "Mad Max Beyond Thunderdome."[3]

Other adaptations of Wagle's game include Ed Burhop's "Murder Hotel" for WWIV, which saw v1.4 released in November 1989. Later, a similar game, "Murder Motel 2114," was released in 1996 by Austin Luminais of Unlsoft.