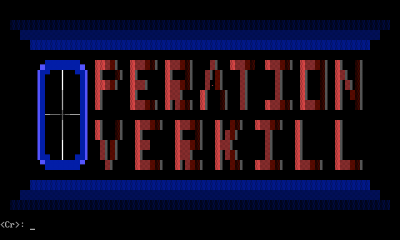 Operation Overkill II is a multiplayer, role-playing door game for bulletin board systems set on post-apocalyptic Earth in the year 2060.

Earth has been invaded by a group of aliens called Hydrites, led by a commander known as "Overkill," in order to seize the Earth's supply of "water crystals."

In OOII, the player's character is a soldier in the human resistance. The goal is to survive by finding food and water crystals, to battle mutants and other creatures, and eventually to eliminate the Overkill commander.

The game's interface consists primarily of textual menus and maps in ANSI color.

The combat mechanism in OOII is unique, in that it is timing based, and tests a player's reflexes. The player is supposed to hit his spacebar at the right moment as a textual "gauge" scrolls across the screen. The player's accuracy determines whether the character registered a hit or a miss in combat. [1] While this system was novel at the time, recent reviewers have criticized it as "bereft of tactics" and "action-oriented in the weirdest possible way" making fights tedious.[2]

In addition to playing through the traditional BBS interface, OOII could also be played using a special terminal program called OOIITERM. This program allowed for faster display of the ANSI graphics and sound effects.

Operation Overkill was supported by Dustin Nulf from Jan. 1988 until Jan. 1995. He sold approximately 3,000 copies of the program. [3] The game was originally called "Dark Wasteland," but Nulf renamed it to "Operation: Overkill" prior to beta-testing it. Nulf was forced to rewrite the game from scratch after a catastrophic computer crash, and so he added a "II" to the title.[2]