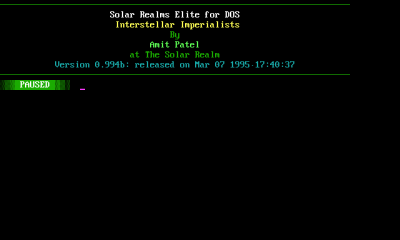 Solar Realms Elite or SRE is a multi-player strategy door game for bulletin board systems[1] similar in design to its successor, Barren Realms Elite (BRE). SRE has been recognized as "advanced for its time" for offering players a range of strategy options "unseen in even most current titles in the genre." [2] 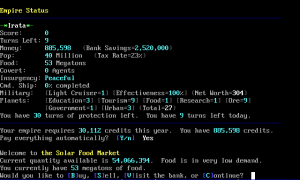 In Solar Realms Elite, players rule a solar empire. The goal is to become and remain the most powerful empire. Players gain strength by buying forces, and gain size by colonizing planets. Players start with several planets and a little bit of money. They must provide food and spend money to maintain the population, army, and planets, or suffer riots and civil unrest. New players are given a short period of protection, during which they cannot attack or be attacked. Players can forge alliances, interact with AI pirates, and wage war with competitors using conventional, guerilla, nuclear, chemical, and covert attacks.

SRE's user interface features many details not seen in other BBS door games, such as the ability to type large quantities in input fields using shortcuts (such as "3K" for "3000").[3] 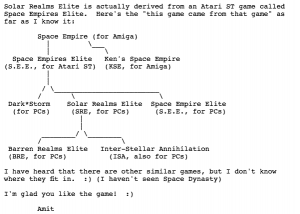 A diagram posted by Amit Patel in the newsgroup alt.bbs.doors explaining the relationships between several BBS door games

SRE was written by Amit Patel in 1990.[4][5] It started as a PC clone of Space Empire Elite, [6][7] a popular BBS door game for the Atari ST written by Jon Radoff. Patel has said he didn’t understand SEE's game design, so instead he used design ideas he had developed from years of writing his own games similar to those he found in the book "Computer Basic Games" by David Ahl.[3]

Space Dynasty, a similar BBS door game for PCs by Hollie Satterfield was also inspired by SEE. Space Dynasty was in circulation around the same time as SRE.

The last version of SRE (0.994b) was released in 1994. Patel has estimated he sold between 1,000-2,000 SRE registrations to sysops over the years he worked on the game.[8] He said the revenue helped him cover his college tuition, but not room and board.[3]

After SRE, Amit Patel and his brother Mehul worked as partners to release a series of similar games under the banner "SRGames". In the beginning, Amit handled more of the technical duties, while Mehul ran the business side. Later they shared these duties more evenly.[3]

SRE was Amit's code, written in C++. Alpha Colony VI and Barren Realms Elite were both written in Turbo Pascal. Amit wrote the infrastructure libraries for these, which Mehul used to write the game code. Later SRGames included Falcon's Eye, and The Arcadian Legends.[3]

This collection of games was sold to John Dailey Software, but SRE was not included in the deal because Amit lost the game's source code in 1996.[9]