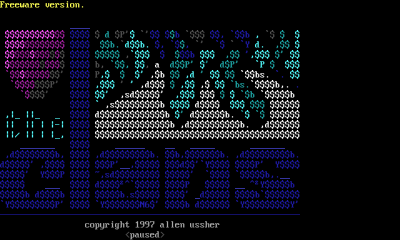 Title screen from The Clans

The Clans is a door game for bulletin board systems offering a mix of role-playing and strategy elements.

In The Clans, a player creates a team of unique characters, choosing their races, profession, and other attributes. This clan is used to fight monsters, cast spells, and wander through villages. At the same time, the player must manage an empire by building structures, developing land, and amassing an army.

While The Clans can be played as a localized game on a single BBS, it is meant to be set up for inter-BBS play. In this mode, each BBS serves as a "village." Players can move their clan, wandering from one village to another. Once the move has been made, they can call the other BBS and play there.

The Clans was created by Allen Ussher and first released in 1997. He switched to a freeware model the next year, and released the game's source code in 2002.