From Break Into Chat - BBS wiki
(Redirected from The Pit (BBS door))
Jump to: navigation, search

Main menu screen from The Pit

The Pit is a door game for bulletin board systems in which warriors fight for glory in a huge arena in Regal City against powerful AI creatures or other players.

The Pit was first released by James R. Berry of Midas Touch Software in 1990.

The player's character is described as "a lowly farmer's boy ready to seek his fortune."

Players begin with thin armor and a weak sword. With each win, the player's character can become stronger and obtain better hand weapons or long-range weapons. Players can also use potions and other magic items.

Screen capture of combat from The Pit

AI opponents range from easy-to-defeat slaves to near-immortal Norse gods, such as Odin and Thor.

Like most BBS door games, The Pit is asynchronous, which means multiple players can play, but not at the same time. When one human player engages in combat with another, the other human player's character is controlled by the game.

When faced with an opponent who is too powerful, a player can try begging for mercy, or fleeing through the single doorway.

Players get a limited number of play sessions per day (usually three), and each play session ends in either a player death or the session timer expiring. 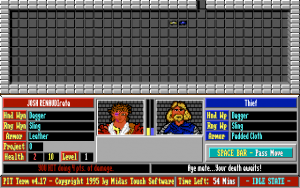 Screen capture of combat in The Pit using the "Pit Terminal" front-end client.

The Pit is one of several BBS door games which offered an optional front-end client. This front-end was meant to overcome the graphical limitations of the game's default ANSI interface, where, for example, the player's character is represented by a "little horseshoe," the Ω character.[1]

By downloading the front-end, called "Pit Terminal" ("EGA Terminal Interface" in early versions) players could enjoy a mouse-driven, point-and-click interface with EGA graphics, MIDI music, and sound effects. Michael Duff was credited as the programmer of early versions of the front-end. The art was created by D. Gregg Hargrove.

In its May 1993 "Telegaming" issue, Computer Gaming World gave The Pit two points out of three, calling it a "tolerably interesting fantasy-themed work."[2] The reviewer also noted that combat in The Pit was more than merely displaying text "hit points." Instead, a player could move his character "around the arena with the number pad."

James Berry died in 1999. In a tribute, Michael Duff remembered Berry as a "a programmer, an entrepreneur and an online gaming pioneer."[3]